For my previous game (Bird Hop) I wanted to use an entity component system, but there were none available for BlitzMax, so I coded my own. Now I am using Cerberus X, and again there is no ECS module available, so I’ve translated my BlitzMax module. In rewriting the module, I’ve cleaned it up and made it more robust. 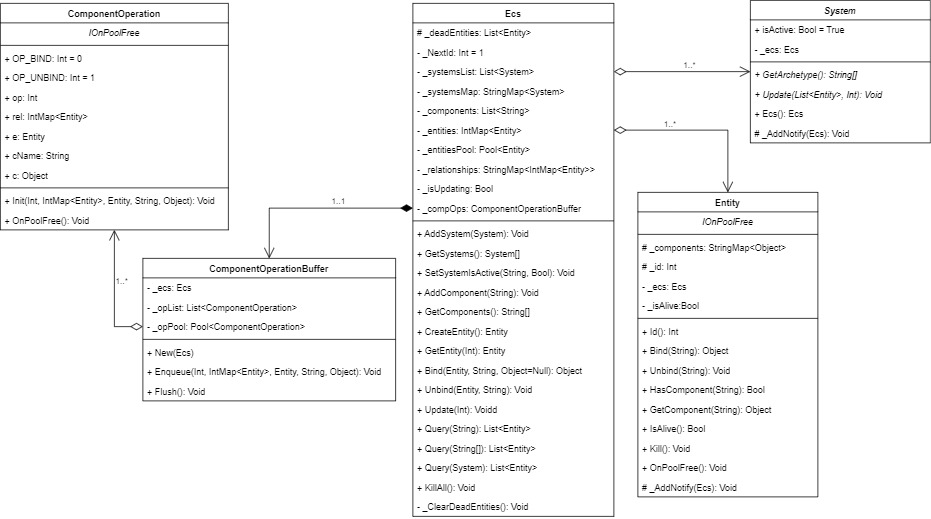 There are three key elements to the module: Entities, Components, and Systems. An Entity is a thing. Components are characteristics of things. Systems contain logic that is applied to things with certain characteristics. In a game there could be a component for a 2D position, and another for an image or animation. A movement system could select entities with a 2D position, and move them according to their speed. A rendering system could select entities with 2D positions and images/animations, and draw them to the screen. This approach is much more flexible than a class hierarchy approach. Entities can be built, changed, and destroyed at runtime.

Here we can see a simple usage example:

Cerberus:
Note: User defined System and Component classes must be added to #REFLECTION_FILTER. Some of the ECS's inner workings rely on reflection.
Example System:

Cerberus:
My ECS is designed with a naïve object-oriented (OO) approach, however there is a more advanced, more performant way via data-oriented (DO) design. Some excellent examples of DO ECSs are EnTT and flecs.

This module is available on Codeberg as part of my game framework.
Last edited: Nov 4, 2022

Welcome! That looks quite a bit of work you put in there. Thank you for sharing it.