When I try use DebugStop (compiling using Desktop mode, and debugmode on) I put the command in OnRender as the first instruction, which makes it lock up everything and I had to reboot? After trying this I have to confess that I have not had time yet to try to put the instruction elsewhere in the code bc I was so sure it would work in some way or another. Will try more later on..

Am I supposed to use it in OnUpdate or other special places in the code? Can I use it in methods and functions called by OnRender?

Works fine here. Can step through the rendering with a problem in mojo. Windows 11.

Well I tried on a demo again now, I picked a standard Mojo2 demo because that is what I use. I added DebugStop command inside OnRender because I don't have more specific instructions on how to use the debugger in Cerberus.

I then select Desktop and Debugmode. It freezes.

What am I doing wrong? 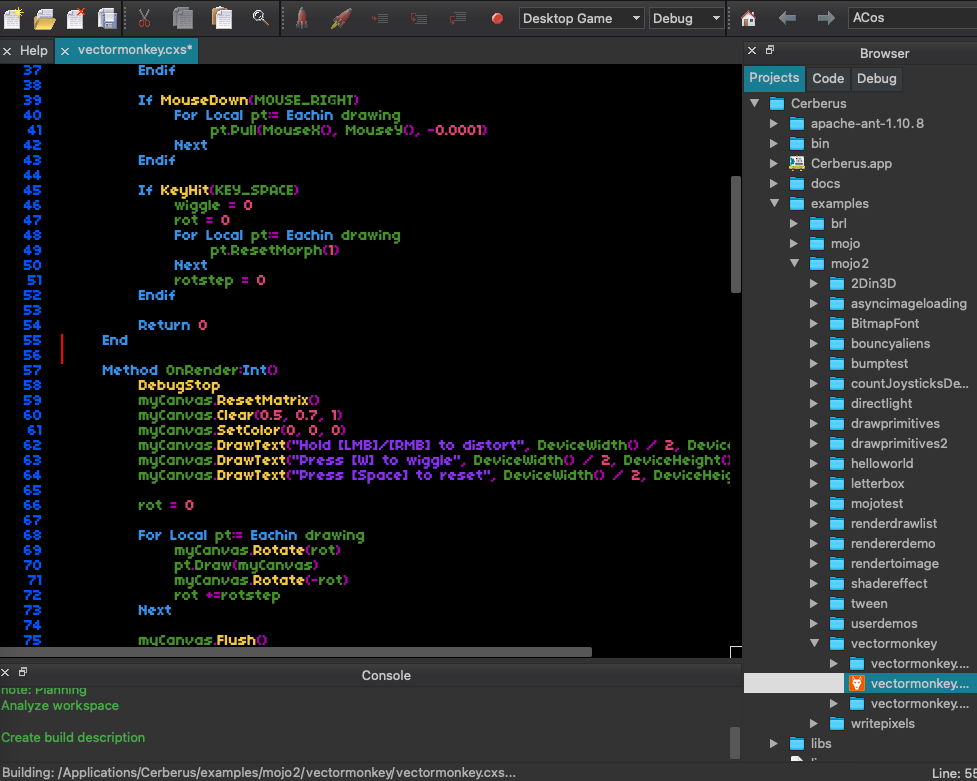 Which platform are you building on?

Mac I guess. Which OS version? Your console in the screenshot looks like you are not even building the app, never mind executing it.

Okay you mention the screenshot. Yes that is correct I had to reboot the mac bc it compiles of course, I made the screenshot to show the code insert, post. When I was running the app It gave you a buzy circle that locks you from tabbing. You need a hw restart. Nothing seems to be wrong otherwise.

As you didn't mention the OS version of MacOs, I went ahead and tested it on 12.2.1. Guess what? It worked just fine.
Now I am updating my good ol' mac mini and will report back again.