I got started with programming during the 80's using BASIC like most programmers back then. Later I got into machinecode, mainly because, that was what you had to do to get good graphics and sound back then. Most ppl wanted to make their own games so programming languages for making arcade-quality games and "Game makers" popped up like crazy.

For nostalgia purposes I made a list over some of the "game makers" that existed back then. These were the pioneers :

1993 the Web arrived and everything went crazy with "Authorware" instead of Gamemakers for a few years.

You used to see these in the magazines back then, You could read about them in a wide variety of ads, from small text-only ads, to fully dedicated pages with lots of screenshots and information about them. You could easily appreciate the amount of work that was put into these. They were basically mini-posters.

Feel free to add If I missed something that you feel I missed. 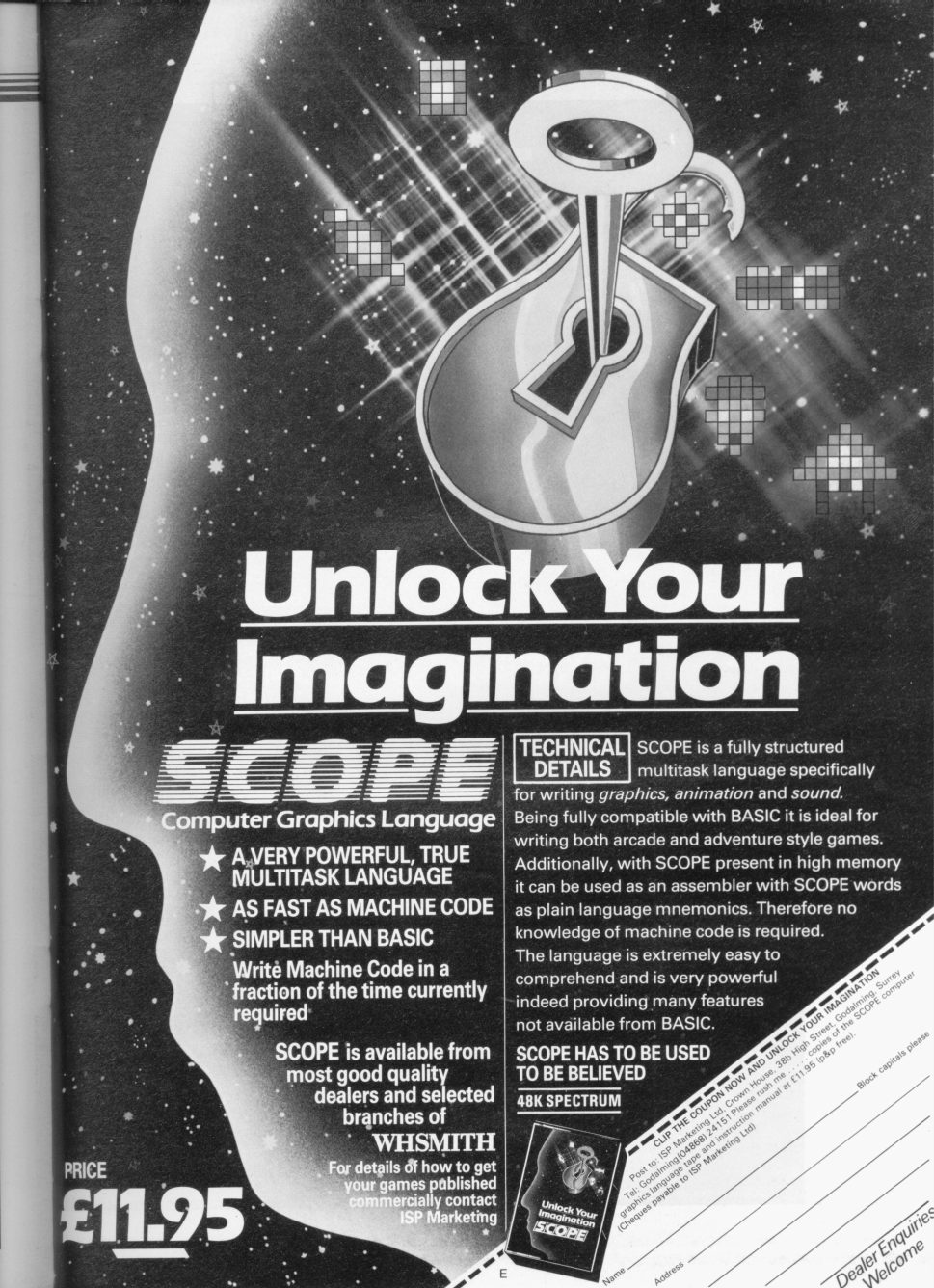 interesting. I was not aware of that the history of game dev tools and programming languages date back so far.
I didn't do any research on this, for some reason I believed back then every computer like the Commodore, Spectrum, Apple was shipping their own version of BASIC and that's it. This is what everyone was using. For some reason the idea people was making tools and editors back then just never occurred to me.

Wish there was some sort of documentary about them.
D

White Lightning was never a BASIC language. It uses a version of FORTH instead of BASIC.
White Lightning, Machine Lightning, Laser Basic, Laser Compiler and Laser Genius were all created by Oasis Software, with the latter three being published by Ocean Software.

There was also a number of adventure creator tools with the most popular being the Graphics Adventure Creator.

dawlane said:
White Lightning was never a BASIC language. It uses a version of FORTH instead of BASIC.
White Lightning, Machine Lightning, Laser Basic, Laser Compiler and Laser Genius were all created by Oasis Software, with the latter three being published by Ocean Software.

There was also a number of adventure creator tools with the most popular being the Graphics Adventure Creator.
Click to expand...

Impressed. Nice to see someon who knows FORTH. Yes I got into ColorFORTH because of White lightning.

There was actually another FORTH that could be worth mentioning here and that is HeliOS which was an amazing FORTH dialect for the Amiga. It was very unique programming language for many reasons, It's hard to explain them here but they were multitasking-related in a veery game-friendly way. It was made in the UK I remember, and was actually the closest rival that BlitzBASIC ever had. It was not free but it was available on the Fish list of PD programs.

Anyone remember that list? In most magazines you had one or two pages that listed the current available Public Domains disks. You could then order them for the price that it costed to send them to you in the mail.

The original AMOS had alot of commands but it did not provide you all the qualities that a professional looking game needed I would say.
AMOS Pro soon came after and was actually slower than the original AMOS. There were also the AMOS compiler (AMOS was interpreted BASIC) and later you had AMOS 3D, and Easy AMOS. All these titles came between 1990-1993.

You had strange commands in AMOS like for instance Mouth, which gave you the height and width of the current speaking string from the Say command. It was basically an equlizer for speech. You could make a pretty realistic animated synced mouth.
It was crazy-filled with commands liked that. But it was so much slower than Blitz.

Shortly after internet arrived I know that the maker of AMOS went to the PC and made something called Click' Create. It was like gamemaker meets hypercard/authorware. It was kind of neat but limiting, most of these gamemakers were actually quiet limiting but stlil so much fun.

I actually also wish there were some kind of documentary about Game makers. It's an era that is about to become forgotten.
Last edited: Jul 3, 2022

I love the fact that Cerberus-X focus on quality in performance, ad when you miss some command you just ADD it using native code, to any or all platforms that you wish.

I see that someone took the name GameCreator and reused it. The big one of course is Unity, that continued the Clickn' Ceate path, which I personally find a bit boring really. It's nice for some things but I personally just want a strong flexible programming language and with that I just build every tool I need from that.
J

I don't think Cerberus-X (I only have experience with Monkey-X but as this is a fork I think my opinion is still valid) is the right choice if you want to focus on performance.

First it uses garbage collection which might be bad if you don't keep it in mind (at least in cerberus you can adjust various things). Then multi-threading support is very poor/nearly not existent which becomse more and more important for high performance apps/games. Simd is not possible without doing it natively. And yes, that's still better than a ton of other languages/tools/engines and you can always make your hands dirty and do stuff natively if you want to. On the other side, I really still love the simple API. I hate huge APIs/Frameworks where you fight against the API all the time - and this happens very, very seldomly in Cerberus.
G

While it's true that Cerberus isn't designed for maximum performance, I think performance is pretty solid for what it is. It's simple enough that you can do a bit of optimisation such as object pooling and reliance on primitives if you need to. And of course it compiles to all the targets.

Yes I found a way how to get performance out of this language. So it is actually very very performant.

It is true I guess that you need to know what to look for, there are many traps. The terrible bugs that existed in Monkey-x are gone now luckily, so you can't compare them and that is good thing. The speed is the same but the quality that you get within the actual framework is totally different. I am developing a professional app right now, and the performance you get is just amazing.

Next up will I am making a few games with friends that I wanted to do using Blitz BASIC but never got around to do.

Talking about the old days, my first computer was a MSX (which wasn't a computer, but a standard followed by several manufactures like Sony, Yamaha, Panasonic and others across the globe)

And for that little bugger there was a TON of stuff. We had a "turbo BASIC" which was the default BASIC with commands like CALL TURBO ON / CALL TURBO OFF - while "turbo" was active, you lose 'disk' access, but most BASIC routines were replaces by optimized ones in Assembly, making things run *really* fast.

We had a "Flash Basic compiler", which literally compiled BASIC code into Assembly (although it was very limited).

MSX-DOS (exactly like MS-DOS, but for MSX) could also run CP/M programs, so we had all sorts of compilers for the machine (Pascal, C, Fortran... you name it!)

We had 'game creators' to make SHMUPs and even RPGs - but in Japanese (The MSX standard was created by ASCII and Microsoft, in Japan), so that was a big barrier back then

There were also a TON of stuff for the ZX Spectrum too.

Oh, yeah - almost forgot: from MSX-BASIC (by Microsoft!), I jumped staight into QBasic (or Quick Basic) for PC, also by Microsoft - it was basically (ba-dum, tsss) the same thing

Then I played with Turbo Pascal for a while (mostly the same as Pascal on MSX too), moved on to Clipper, C and then went on to program on almost every language under the sun back then

SLotman said:
Oh, yeah - almost forgot: from MSX-BASIC (by Microsoft!), I jumped staight into QBasic (or Quick Basic) for PC, also by Microsoft - it was basically (ba-dum, tsss) the same thing

Then I played with Turbo Pascal for a while (mostly the same as Pascal on MSX too), moved on to Clipper, C and then went on to program on almost every language under the sun back then
Click to expand...

Good times! Agreed Do you remember some languages or gamemakers that you were particular fond of?
J

Wingnut said:
The terrible bugs that existed in Monkey-x are gone now luckily, so you can't compare them and that is good thing. The speed is the same but the quality that you get within the actual framework is totally different.
Click to expand...

I'm curious which terrible bugs existed in Monkey-X before?
G

Me too, honestly - there absolutely were some bugs but the ones I remember (crashing int conversions on some targets, dodgy Rnd) were local and easy to work around if they hit you.

I stumbled upon quiet a few bugs but they are all ironed out now. The most prominent ones were ones concerning graphics and input I remember a few actually, one I remember was that readpixel had problems reading from the correct canvas. Other bugs where target-dependent, like how HTML5 could not read keyboard correctly after you clicked outside the window once and back.
Last edited: Jul 17, 2022

Wingnut said:
Good times! Agreed Do you remember some languages or gamemakers that you were particular fond of?
Click to expand...

I wrote A LOT of stuff in Visual Basic 5/6 - mostly desktop apps, some running to this day. I also did some games in VB and Direct-X 7, before finding Blitz3D and later BlitzMax

One of the first games I did with it and released (on old 'Winsite') over 20 years ago was this one, a remake of Atari 2600 "Frostbite":
But my first "big" break into gamedev was in 2005 with Blitz3D and this game I've made called 'Virtual Marbles' (also '3D Bliglie' or 'Murmeln 3D') that got published by Oberon Media and Contendo Media:

In 2018 I made another game w/Blitz3D, called "Snail Racers", which won a nacional gaming festival here in Brazil - but commercially it was a flop. People was comparing it to 'Mario Kart'

Got another big break with BlitzMax and my "Mahjong Max" - this one was published by Oberon, iWin, GameHouse and Boonty (although I never saw a dime from Boonty to this day)